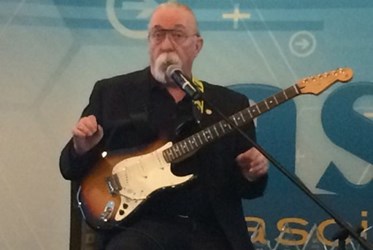 Jeff “Skunk” Baxter wasn’t involved with any bombs during his days as a founding member of Steely Dan or his five-year run with the Doobie Brothers, however — at least since the mid-1980s — his life has been filled with them.

Baxter, 67, closed the ASCII Success Summit held in Milwaukee, WI by discussing his transition from Doobie Brother to national security expert. That’s right; the long-time musician with eight platinum records to his credit (he’s been performing since 1968) has become one of the national-security world’s most well-known counterterrorism experts. In this role, Baxter helps both policy makers and defense contractors better understand the way terrorists think and plan attacks.

In addition, Baxter works regularly for the Department of Defense and the nation’s intelligence community, chairs a congressional advisory board on missile defense, and has lucrative consulting contracts.

According to his Facebook bio, Baxter “fell into his second profession almost by accident. In the mid-1980s, Baxter's interest in music recording technology led him to wonder about hardware and software that was originally developed for military use, i.e. data-compression algorithms and large-capacity storage devices. As it happened, his next-door neighbor was a retired engineer who had worked on the Sidewinder missile program. This neighbor bought Baxter a subscription to an aviation magazine, provoking his interest in additional military-oriented publications and missile defense systems in particular.”

Baxter became self-taught in this area, saying, “So, one day, I don't know what happened. I sat down at my Tandy 200 and wrote this paper about how to convert the Aegis weapon system — why it would make sense to convert it to do theatre missile defense because it would be on a mobile platform and give the United States a new role in NATO in the 21st century. I have no idea. I just did it.” He gave the paper to California Republican congressman Dana Rohrabacher, and his career as a defense consultant was launched.

According to a 2005 Wall Street Journal article, “One of Mr. Baxter’s clients — General Atomics’ vice president Mike Campbell — likens him to a ‘gluon,’ a term drawn from quantum physics that refers to the particles binding together the basic building blocks of all matter. Contractors and policymakers say Mr. Baxter can see past bureaucratic boundaries and integrate information drawn from a variety of sources.

“Mr. Baxter can speak the acronym-heavy vernacular of the professional defense consultant, but he would never be mistaken for one of the hardened ex-military men who fill the ranks of the industry. He rarely wears ties, is fond of self-deprecating jokes, makes frequent popular-culture references, and peppers his speech with casual profanity.”

For the record, Baxter didn’t drop a single f-bomb during his talk at the ASCII Success Summit, but he came close.

Baxter’s unconventional approach to thinking about terrorism, tied to his interest in technology, was a major reason the government sought him out and is crystalized in the following quote: “We thought turntables were for playing records until rappers began to use them as instruments, and we thought airplanes were for carrying passengers until terrorists realized they could be used as cruise missiles. Among other things, what I do is look at existing technologies and hypothesize how they might be applied in non-traditional ways, something that happens in music all the time and also happens to be something that terrorists are incredibly good at.”

According to Baxter’s one-time boss, retired lieutenant general Henry A. Obering whose last assignment prior to retirement was as Director of the Missile Defense Agency, Baxter’s greatest strength is “in a word: out-of-the-box thinking. He comes at problems and he comes at challenges that we may face with a very different perspective.”

Obering made these comments as part of a story the Today show did on Baxter which was shown during his ASCII presentation. As part of that interview, Obering was asked if he could give an example of Baxter’s out-of-the-box thinking that’s not classified. “Very few,” Obering replied. “But when we were looking at how we could build some of the building blocks in the missile defense system, he brought some very innovative ideas.”

It was that innovative thinking that prompted ASCII to invite Baxter to the Milwaukee Success Summit, and he didn’t fail to deliver. Charming, engaging, and displaying a terrific sense of humor throughout his 70-minute presentation, Baxter started by asking people not record the event as it would allow him to be much more candid. “Many people confuse national security with politics and, because we are immersed in a very politically charged environment, I want to deliver as informative a presentation as I can,” Baxter said. “Anything that is recorded pretty much finds it's way into the public.

Baxter the spoke about working on the Strategic Defense Initiative, a proposed missile defense system intended to protect the U.S. from attack by ballistic strategic nuclear weapons. The system, which was to combine ground-based units and orbital deployment platforms, was first publicly announced by President Ronald Reagan on March 23, 1983.

“We did some pretty cool stuff,” Baxter said, adding, “Reagan’s plan was a bit much. It was a plan to drive the Russians nuts and it worked. They believed what we were doing was real and spent lots of money trying to counter it.”

Then, General Lester L. Lyles, former United States Air Force general, Vice Chief of Staff of the United States Air Force, and Commander, Air Force Materiel Command, Wright-Patterson Air Force Base, asked Baxter to meet with Boeing and Lockheed Martin to discuss missile defense. “I figured out what Lester wanted me to do, so I showed up at Lockheed looking like a hippie and they talked down to me,” Baxter said. “So I said, ‘Far out’ then asked some tough questions. It forced them to tell the truth, they had to tell me everything.”

Baxter also provided analysis of the 1993 attack on the World Trade Center, recalling there was only a single support beam keeping Tower One from coming down. It was there he worked with Charles Allen, an American public servant notable for his roles at the United States Department of Homeland Security's Office of Intelligence and Analysis and, before that, the Central Intelligence Agency.

Baxter’s work with Allen led him to begin to question if it is possible to teach people how to improvise, and this is where he melded his musical background with his counter intelligence work. “We all have the basic capability to improvise,” Baxter said. “The problem with human beings is they tend to be fearful. Usually your first impression is best and you’ve got to learn to trust your gut.”

Baxter continued, “There are two kinds of musical organization. The symphony orchestra, which is kind of weird and, when you think about it, looks just like the government. It’s wonderful to listen to the music, but the musicians are only there because of their expertise and ability to play the music on the paper in front of them.” 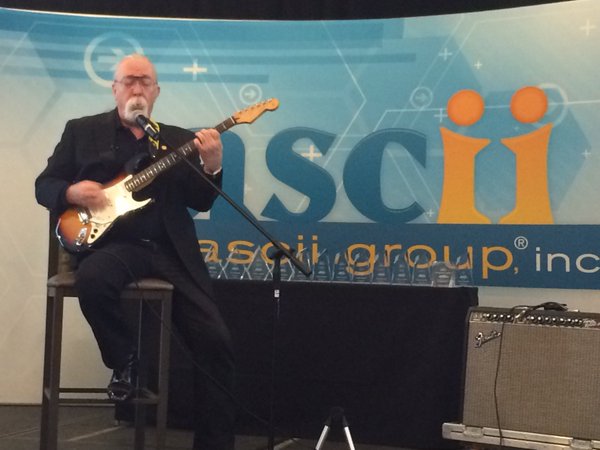 The other type of music, according to Baxter, is the jazz quintet. “Jazz is really simple. Take a theme and everybody in the quintet plays it one time through. Because it’s horizontal, everyone improvises over the theme, basically an analysis. They come out with an analytical product. Put five really smart people in the room and let them improvise.”

MSPs need to approach business this way, says Baxter. “We are a country with a varied heritage. America is a melting pot with levels of expertise and analysis. It’s a plus, and that’s how we need to start solving problems: bring in smart people from all walks of life and let them work.”

Baxter started to pull everything he had been talking about to this point together by bringing in the thinking of Colonel John Richard Boyd, a United States Air Force fighter pilot and Pentagon whose theories have been highly influential in the military, sports, business, and litigation.

Known as “Forty Second Boyd” for his standing bet as an instructor pilot that beginning from a position of disadvantage, he could defeat any opposing pilot in air combat maneuvering in less than 40 seconds, Boyd changed the world. His unique way of looking at flying and designing aircraft was instrumental in advancing American air combat.

During the Korean War, the Soviet MiG-15 and the American F-86 Sabre — each with their own special characteristics — were more or less evenly matched, but the kill ration was eight-to-one in favor of the US/UN forces due to the training of the pilots that flew the F-86. The Vietnam War saw that ratio fall to one-to-one. After Boyd provided input, America developed the F-15 which has a kill ratio of 141-0.

“Boyd was hated by a vast majority of he military because he was right and they wanted to build other airplanes,” Baxter said. “But he was right,and he did have a few people in the military and political leadership that believed in him.” Boyd's key concept was that of the decision cycle or OODA loop, the process by which an entity (either an individual or an organization) reacts to an event. According to this idea, the key to victory is to be able to create situations wherein one can make appropriate decisions more quickly than one's opponent.

Boyd hypothesized all intelligent organisms and organizations undergo a continuous cycle of interaction with their environment. Boyd breaks this cycle down to four interrelated and overlapping processes through which one cycles continuously:

To illustrate the simple elegance of this solution, Baxter broke down the Steely Dan song My Old School, changing the tempo, chords, and melody to turn it into a country-style tune. “We can agree it’s My Old School, right,” Baxter asked. “But it isn’t. We broke it down to its basic components and rebuilt it.”

Baxter used several more examples to drive his point home, including Oakland A’s General Manager Billy Beane’s Moneyball approach to building a baseball team and that of his current boss, Al Gray. “Al was a commandant in the Marine Corps who had to figure out a way to get battalion leaders to think differently in high stress situations. He said ‘Take 10 battalion commanders and put them in the New York Mercantile Exchange.’”

Gray’s theory: These commandants had to figure out how to think quickly in high-stress situations on the battlefield, a scenario similar to that on the Mercantile Exchange. “And it worked,” Baxter said. “Within half an hour they had formed decision-making groups and solved problems.”

Baxter’s presentation was coming to an end, and he started doling out the advice the attendees had come for. “So many people will say a problem is too hard to figure out, it’s not my area of expertise,” Baxter said. “You need to really, look inside yourself or ask the person next to you — regardless of who that may be. It doesn’t matter if they’re an expert, they can run out of ideas pretty quick. Don’t sit around with your thumb up your nose. Take personal responsibility and take chances. Trust your gut, look at things from a different point of view, and solve problems.”

“But what I truly believe the key to success to be is trust your gut. I don’t know what the Holy Grail is, but I know you have to be fearless, not afraid to be embarrassed, and not afraid of your peers telling you you’re wrong. And don’t be afraid to talk to your kids — they’re unbiased and fearless.”

Baxter closed, saying somewhat poetically, “Look at the world through the eyes of wonder because once you stop, you might as well buy the farm.”

The ASCII Success Summit – Milwaukee is being held April 27-28 at the Crowne Plaza Milwaukee Airport. It is one of nine solution provider-focused conferences ASCII will host in North America in 2016. For more information on ASCII, go to www.BSMinfo.com/go/InsideASCII.