Tech Together: How AI, Blockchain, Drones And IoT Can Safeguard The Supply Chain 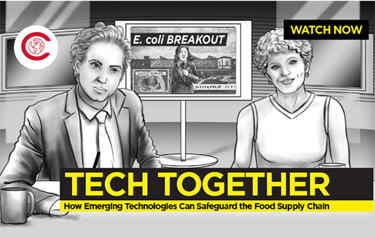 An E. coli outbreak of romaine lettuce made national news in late 2019, an incident that lasted more than two months and infected 167 people in 27 states, sending 85 to the hospital. The year before, a similar outbreak caused the Centers for Disease Control and Prevention to tell Americans to throw away all romaine lettuce. How could it have been prevented? Members of CompTIA’s Industry Advisory Councils think they have an answer.

The council members believe their respective technologies could be implemented in an end-to-end solution that would raise red flags at multiple points along the supply chain and prevent the lettuce from ever reaching customers’ hands. To demonstrate, four of the councils (Artificial Intelligence, Blockchain, Drones and IoT) collaborated to create a video that explains how the emerging technologies could minimize a potential E. coli risk.

The video, available here, begins with a TV newscast talking about an outbreak, before “rewinding” to a farm scene where drones and IoT sensors capture data about the produce, which is picked, placed on a truck, and shipped to a warehouse. Behind the scenes, AI analyzes the data, which is written to a blockchain, an immutable record of the data. All told, the four technologies recognize a potential problem, the produce is tested and ultimately destroyed because it’s infected. At the end, the TV news team broadcasts a much happier story because the outbreak never happened.