Why A POS Solutions Provider Is Building A $10 Million Office 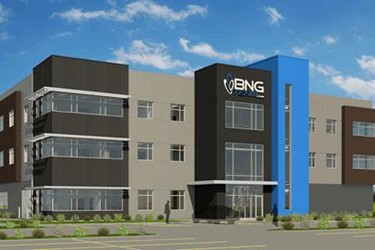 Brady Nash and the co-founders of BNG Holdings started dreaming of building a Google-like work environment in Fargo, ND while they were still 18 and 19-year-old college kids selling telecom and cable services for a multi-level marketing company. Fast forward a little more than 10 years later, and the technology company broke ground on what will be a 34,000 square foot office building. BNG’s current portfolio includes selling payment processing, POS technology, and web design services to retailers, restaurants, hotels, and wireless merchants. It also has a separate software division – a homegrown automated billing and invoicing solution currently used by thousands of IT services providers. Real estate is just one more way BNG is diversifying its portfolio.

“My business partners are entrepreneurs. We always wanted to get into real estate. If you want to get into real estate, why wouldn’t you own your own building?” says Nash.  “I’m not going to default on my own mortgage. The building will be owned by a separate entity, but I feel we’ll be a really damn good tenant. We build that asset out, and that’s why we wanted to build and own our own, quality building and get it the way we want it from an investment standpoint.”

Even if Sperling's BestPlaces cost of living comparison calculator puts Fargo as 168 percent less expensive to live and work in than San Francisco and 67 percent less than Boston, that still doesn’t mean it’s cheap to customize an office like this. Nash estimates the total project will run close to $10 million. It could have been much cheaper if it weren’t for features like:

Why is a scrappy, bootstrapped IT services company splurging on zip lines and basketball courts? After all, BNG Holdings didn’t earn a 133 percent three-year growth rate and a spot on the Inc. 5000 list by spending frivolously. Nash explains, “We wanted people to know we could have saved a few million bucks building this. Then people would walk in and say, ‘Hey Brady, this is a nice, new office building. This is cool, congrats.’ When you walk in this building, your jaw is going to drop. We wanted to do that. I wanted our employees and their spouses to continually think, ‘Wow, these guys do care about us, and they don’t just say it – they show you.’”

For BNG, the new office is much more than a solid real estate bet, it’s also a tangible way to reinforce its commitment to employees. Nash understands culture is something that needs continuous work. He likens it to marriage – he can’t show up with flowers and take his wife to dinner once and expect that to count for the year. “Talk is cheap, right? This is our statement to employees of ‘We’re putting you first, we want you to be proud of where you go to work every day.’ We want it to be a talking point.”

It helps that BNG’s rapid growth is footing the bill for the new building. The $7.1 million dollar company is expecting to grow by more than $2 million in 2018. More than 80 percent of its annual revenue is recurring revenue, which makes it less stressful to finance a large project like this. Nash spells out the math: roughly speaking, every million dollars in the building equates to $6,500 per month. BNG is currently increasing its recurring revenue by more than $12,000 every month. Nash says, “In two months, our extra recurring revenue gives us the money we’re putting into upgrades for the building. Plus, we know there’s ROI wrapped up with keeping and attracting talent. The story of who we are and how we treat employees is the big thing behind the building, besides being able to add more bodies. We need room to grow anyway, and now we can set this up exactly the way we want.”

The company currently employs 47 people and they are just about out of room at its current office. Nash hopes BNG will be able to move to its new office by late November or early December 2018. In the meantime, the company has already started preparing for the move by transitioning to the cloud. Most of its infrastructure is now running on Azure, and BNG has already started planning for its servers and phone systems to move seamlessly. It’s not hard to imagine BNG will be flooded with resumes once it has the office space to fill with new hires.