The Real Secret To Creating A Managed Services Differentiator

This telecom consultant-turned-managed services provider (MSP) solved a common pain point for a majority of its customers and doubled its business over a three-year period.

Why Selling Switches-as-a-Service Is A Game Changer

When Keith Fletcher started at Speros three years ago as the COO, he had one primary mission: help the company grow. And he knew that increasing the company’s monthly recurring revenue (MRR) was the best way an MSP can grow. One of his biggest accomplishments started with developing a Hardware-as-a-Service (HaaS) program with Speros’ firewall manufacturer, SonicWALL.

While selling Firewall-as-a-Service was a step in the right direction, Fletcher knew getting Speros’ routing and switching manufacturer partner, ADTRAN, on board with HaaS would be an even bigger win. “Switches are key components of any networking infrastructure,” says Fletcher. “Switches can do things at layer 3 [also known as the open systems interconnection layer] that routers cannot. Routers hand off T1 lines to switches. Wireless access points even have to connect to switches. If the switch is old and slow, the network will feel old and slow.”

When Fletcher approached ADTRAN about the possibility of starting a HaaS program, he was pleasantly surprised to find out that not only did the manufacturer fully embrace the idea, but it also wanted to bundle its management suite with its hardware as well. “As an MSP, we use a remote monitoring and management [RMM] tool, which monitors the status of our customers’ computers, servers, and network devices,” says Fletcher. “But, ADTRAN’s router and switch monitoring tool goes much deeper and allows our technicians to see and do much more with ADTRAN’s hardware. For example, the management tool allows us to remotely configure ADTRAN switches and routers, back up the devices, and perform device updates and reboots. The management tool also reports on network health and data usage. We can leverage this insight to tailor services that align to customers’ consumption of networking technology and proactively engage with customers on capacity planning.”

Fletcher says the ADTRAN HaaS program has been in place only since June of this year, so he doesn’t have any specific metrics to report yet, but he says he has seen a significant reduction in on-site repairs.

“Another reason we like working with ADTRAN is because of the research and science that are involved in their products,” he says. “ADTRAN provides network infrastructure to telephone carriers across the globe, and it is one of the pioneers in delivering high bandwidth over legacy infrastructures. Unlike some manufacturers that never seem to make anything new, ADTRAN is always innovating and looking for ways to improve its technology. One principle they understand better than a lot of other companies is that you cannot run tomorrow’s technology on today’s network. And, they also understand that if you’re stuck on five-year network equipment upgrade cycles, you’ll always be behind.” 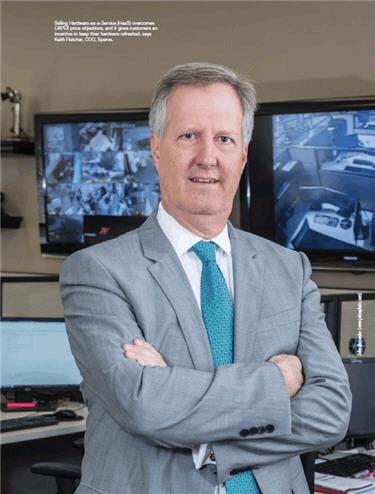 Some of the most successful companies don’t invent new things — they make an existing product, process, or service better. One case in point is Apple. It didn’t invent the smartphone or tablet or even subscription-based music services; it just made these products and services better. The same principle holds true for managed services. You don’t have to come up with a brand-new technology or web service to sell your customers; you simply need to solve your customers’ business challenges in more innovative ways than your competitors are doing.

One case in point is Speros, a telephony consulting company that was founded by Susan Speros more than 32 years ago. Five years ago, the company made a foray into selling managed services. Unlike lots of other companies that made similar moves and foundered, Speros succeeded, doubling its revenue over the past three years. Having an established base of over 1,000 telephony customers didn’t hurt, but figuring out how to sell Hardware-as-a-Service (HaaS) played a much bigger role, says Keith Fletcher, Speros’ COO.

The Smart Way To Sell HaaS
One of the biggest objections MSPs have to contend with is price. This objection comes from two areas. First, there’s the paradigm shift required for customers who are used to paying for IT services only when they buy something new or when something breaks. And now you’re trying to pursuade them to pay your company a monthly fee even when everything is running smoothly. This objection is overcome by educating customers on the true cost of downtime and lost productivity that occurs every time something breaks, and they’re waiting for it to get fixed.

Even if an MSP gets good at resolving the first price objection, the second objection can prove even more problematic. Before placing a new customer on a managed services program, most MSPs (good ones anyway) will conduct a thorough network assessment and identify computers, servers, and other networking equipment that are reaching (or have reached) end of life and need to be replaced. Additionally, most MSPs will look for expired warranties and expired software subscriptions and bring those matters to their customers’ attention as well. Although some expenses can likely be postponed for a few months, the bottom line is that new customers have to make a sizeable capital investment before starting on a managed services contract. Sometimes the cost required to make a customer “managed services ready” is too cost-prohibitive for the customer, and it delays the sale. And herein lies the problem.

Some MSPs walk away from a deal if a customer can’t commit to the upfront capital expense. Other MSPs, who recognize the value (and stickiness) of having customers on long-term contracts, will sell the hardware at cost in hopes of overcoming the price objection. Another option is to bundle the hardware with the managed services package via a HaaS plan. HaaS reduces upfront CAPEX (capital expenditure) and replaces it with a more manageable OPEX (operating expenditure).

Fletcher agrees that selling HaaS is the best choice for solving CAPEX objections, but he says not all HaaS strategies are a win-win. “One school of thought is for the MSP to use a leasing company to sell hardware to customers,” he says. “There are two problems with this method. First, the leasing company makes most of the money, since it holds the contract. And second, customers are typically stuck with the hardware for five years, and they are at the mercy of the lease holder as to when they can upgrade again.”

Lots of MSPs try to overcome the above pitfalls by self-funding their HaaS programs, but that creates a whole other set of problems, says Fletcher. “Self-financing eats into an MSP’s cash flow, which can put the company in a financial bind, especially if it’s new to selling managed services. Some MSPs finance their HaaS programs through a bank, which gives them more control than using a leasing company, but it still eats into their profit margins. The best way to run a HaaS program is by working with manufacturers and having them take on the financial burden. Then it becomes a win for everyone involved. The customer gets the hardware at a price it can afford, the MSP is able to resell the hardware at an acceptable margin, and the manufacturer gains a longterm customer.

Speros began pursuing HaaS more than three years ago, starting with Dell, which had acquired SonicWALL about one year prior. Dell referred the MSP to IT rental company and business partner, We Rent Technology, which specializes in providing Firewall(s)-as-a-Service, Network-as-a-Service, and VoIP-as-a-Service to IT channel companies. Speros’ HaaS program started with selling Firewall(s)-as-a-Service, which became an instant hit with its customers. “A businessgrade firewall with support starts at about $1,100 and can scale up to $15,000 for companies that need higher levels of security and web filtering [e.g. hospitals],” says Fletcher. “With HaaS, a small business can rent an $1,100 firewall for $60 a month. Plus, by moving to the OPEX model, the customer has a tax incentive because the entire rental payment is deductible. This is a significant savings over depreciating the asset, making the effective payment only $45.00 per month.”

After its experience selling firewalls on the HaaS model, Speros approached ADTRAN about starting a similar program with its routers and switches. “We showed them what we were doing with SonicWALL through We Rent Technology, and that had a big impact on ADTRAN’s agreeing to start a HaaS program, too,” says Fletcher (See page 24 to learn more about Speros’ partnership with ADTRAN).

“Some salespeople require more education to see the long-term value of selling subscription services before they can make the mental switch.”

The benefits of manufacturer-driven HaaS programs go a step further, he says. “Customers are not stuck with the same technology for five years. In fact, most manufacturers prefer to refresh the equipment every two years. Because manufacturers are receiving money from their customers each month, it helps their cash flow and enables them to provide more frequent refresh rates. Plus, the customers’ networks run better, and MSPs have fewer issues to deal with because they are not dealing with outdated technology – everyone benefits. Some manufacturers could take it a step further by refurbishing their older technology and selling it off shore, which would further help their profitability.”

Get Your Salespeople On Board With HaaS
One of the biggest challenges solutions providers face when they start selling managed services and cloud services is figuring out how to incentivize their salespeople to stop selling $10,000 projects and start selling $200-a-month subscriptions. “The challenge is even more profound when you try to change from selling $15,000 firewalls to Firewall(s)-as-a-Service subscriptions, which might be $700 per month,” says Fletcher. MSPs have basically three options from which to choose. “They can pay their sales reps like insurance agents, which is a percentage of the monthly fee. Another option is to pay salespeople on the total value of the contract. For example, a two-year contract that nets $200 a month is worth $4,800, so the salesperson’s commission would be a percentage of the $4,800. A third strategy is not to pay a commission but instead to increase salespeople’s salaries, track their productivity, and create target bonuses along the way.”

There is no one right sales compensation answer for every MSP, says Fletcher. “We have used a hybrid of all three models over the years,” he says. “A big part of the decision comes down to a company’s cash flow. For example, if cash flow is tight, the insurance model will likely be a more attractive choice. After an MSP’s recurring revenue exceeds its project-based revenue, it may make sense to switch to one of the other two models.”

Fletcher says that Speros’ monthly recurring revenue surpassed its operating expenses last year, which enabled it to modify its sales compensation model. “Another thing to keep in mind is your sales culture,” he says. “Some salespeople require more education to see the long-term value of selling subscription services before they can make the mental switch.”

One of the best benefits of moving to managed services and HaaS, aside from revenue growth, is customer satisfaction, says Fletcher. “Our customer retention rate is above 95 percent,” he says. “The only reason a customer goes away is that it either goes out of business or gets acquired by another company. The experience has been positive all the way around — our manufacturers are benefitting from the recurring revenue phenomenon, our customers get enterprise-grade networking products at a price they can afford, and our business has doubled over the past three years. That’s how a true partnership should work.”