Grow Your Managed Services Revenue Without Losing Your Personal Touch

A security-first focus and the decision to maintain a personal relationship with each customer are leading to revenue growth for this MSP in 2017.

4 Reasons To Move To A New Managed Firewall

Like any managed services provider (MSP), CCB Tech Group (CCB) prefers to develop close relationships with its technology vendors and change vendors only when necessary — especially when it comes to security vendors, which make up 30 percent of its revenue. For nearly 10 years, it stayed with the same firewall vendor. But, a couple of years ago after its firewall vendor was acquired by a large computer company the MSP had been burned by in the past, it started looking for a new vendor. The search led to Calyptix Security (Calyptix), a network security company that makes the AccessEnforcer, an OpenBSD (Berkeley Software Distribution)-based all-in-one internet security appliance for small to midsized businesses. According to Robert Coop, CEO, and Jeremy Colson, CTO, there were four criteria that separated Calyptix Security from other firewall options:

1. Fewer upfront capital expenses. “Many firewall vendors we evaluated wanted us to purchase their equipment and software outright — for $1,500 or more — and then set up our own finance plan with recurring payments system for our customers,” says Coop. “With the Calyptix Breakthrough Program, we pay a monthly subscription and license fee that coincides with how we bill our managed services clients.”

2. No add-on fees or yearly subscription renewals.
Some firewall vendors make their pricing appear competitive by quoting only the costs of their most basic security features, says Colson. “Then they charge additional fees for email filtering and web filtering services. Making matters worse is that the solutions provider has to remember to keep up with multiple software licenses and renew them annually. Calyptix bundles all its security services into one price and it sells it as a perpetual license, not annually.”

Colson recalls that with CCB’s previous firewall vendor, he had to maintain a spreadsheet with every firewall software purchase, and he had to log into the vendor’s website every six months to see what was expiring. “Next, I had to create a quote for customers whose licenses were nearing expiration and inform them about renewal costs,” he says. “Then, I’d have to wait for each customer to get back to me with approval, so I could order the licenses, which took a couple of days. On one occasion our distributor shipped the wrong licenses, which was a $30,000 mistake, and it took them seven months to correct the error.”

3. Built-in security continuity. Setting up a firewall for the first time can take several hours, especially if there are multiple virtual private network tunnels and sophisticated business rules that must be configured, says Coop. “If the firewall quits working and has to be replaced, the IT solutions provider has to repeat the same lengthy setup process. With Calyptix, on the other hand, the firewall settings and logs are automatically backed up to the cloud each night, which drops the restore time down to less than an hour.”

4. Easy upgrades. When an MSP sizes a firewall for a customer, it has to know how much CPU power and RAM the customer needs currently with a little more added in for future growth. If a customer goes through an unexpected growth spurt, however, it can easily outgrow its firewall— long before the firewall is at the end of its lifecycle. “With our previous vendor, these situations put our company in a difficult predicament,” says Coop. “We either had to convince the customer to pay for a new, more expensive firewall, or we had to eat some of the expense and try to repurpose their older firewall. Calyptix eliminates this problem, too, by buying back the used firewall and taking on the burden of refurbishing, reselling, or recycling it.”

Coop says Calyptix understands that his company wants to become a managed services provider that provides comprehensive security, not a firewall equipment reseller that sells security subscription renewals. “Their support and communication has been stellar, too,” he says. “If we have a question, we can always get a knowledgeable, US-based tech on the phone. The entire experience has been superior compared to our previous firewall vendor.” 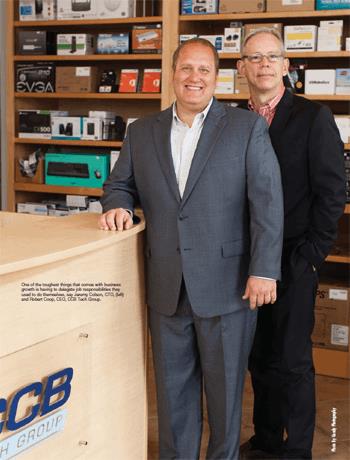 One of the toughest things that comes with business growth is having to delegate job responsibilities they used to do themselves, say Jeremy Colson, CTO, (left) and Robert Coop, CEO, CCB Tech Group.

The year 2016 can best be described as a rebuilding year for managed services provider (MSP) CCB Tech Group (CCB). The company, which has had several years of growth over its first 10 years in business, lost a couple of senior technicians to large enduser companies last year, which led Robert Coop, CEO, and Jeremy Colson, CTO, to spend less time on sales and more time hiring and training replacements — in addition to making a couple of big changes within the company. The fact that the 11-employee company was able to keep its revenue flat in 2016 was a victory in itself. Coop and Colson have big plans for CCB in 2017 and believe the changes and investments made in 2016 will help the company get back on a growth path this year.

1. Develop A Systematized Security-First Mindset
When you’re a small MSP with senior-level engineers and technicians, it’s easy to get away with having few written policies and procedures. But, as a company grows and hires less-experienced workers, it becomes necessary to develop better systems and guidelines. “Our organization had to develop a security-first mindset,” says Coop. “Field engineers had to understand, for instance, they cannot comply with a customer’s request to generically open port 23 on a legacy firewall as a shortcut to resolve an internet software access issue.

Security cannot be compromised for expediency or a quick fix to resolve something.” Colson concurs and adds, “Getting customers to understand that antivirus is not the only thing they need any more to stay protected is important, too. The playing field has changed, and customers need layered protection for their businesses. One of the biggest changes the MSP made was replacing a key security vendor with Calyptix Security, maker of an all-in-one internet security appliance.

Hiring and training new employees wasn’t the only driver for CCB’s new policy developments, say Coop and Colson. A significant amount of the MSP’s new business came about as a result of companies that were dissatisfied with their previous MSP’s performance. And CCB didn’t want to be guilty of making the same mistakes. “A lot of the problems were the result of customer neglect,” says Coop. “Some of our new customers had been paying $1,000 a month to other MSPs, and when we looked at their server closets, there was dust on the servers, and their networks were in shambles. The previous MSP started billing the customer a monthly flat fee, then stopped servicing them.”

Coop says part of the problem is the bad marketing that circulates through the channel from MSP vendors. “You hear stories about MSPs with only a few techs managing 10,000 endpoints; it’s just not reality,” he says. “Customers still need their IT solution providers to show a little TLC and communicate with them.”

2. Don’t Lose Your Personal Touch As You Grow
Coop and Colson admit that some of the biggest challenges with growing their company is the loss of control and the inability to personally follow up with every customer. “I used to know each customer by name, plus their kids’ names, and personal things like where they were going on vacation each year,” says Colson. “Now that we’ve added several new hires to our staff and acquired more customers, it’s not uncommon for our company to service a customer that I’ve never even spoken to.”

To avoid losing its personal touch, CCB hired a customer care manager who personally contacts every customer after a service ticket has been completed. “She talks to 20 to 30 customers every day, she knows them all by name, and she confirms they’re happy with our service,” says Coop. “She’s also in charge of accounts receivables. It makes it much easier to collect payments when you have a relationship with your customers. The majority of times if a customer is late with a payment, the problem gets resolved right away after a single reminder.”

Having a customer care manager also has allowed Coop and Colson to evolve in their roles, from being involved with everything to specializing in a few areas. “I’m now in charge of our accounting, finance, and business development, and Jeremy is in charge of all things technical,” says Coop. “Delegation is a difficult activity for both of us, but it’s a necessity for growth. We’ve had to learn to trust our employees and rely on the notes in our CRM system rather than micromanaging every sales and service activity.”

3. Complement Security With Industry Compliance Expertise
Over the past couple of years, CCB has focused on helping its customers in dental and medical industries achieve HIPAA and PCI (payment card industry) compliance. “We’ve invested dozens of hours in online training to achieve industry compliance with rules and regulations that affect security and network design, and we participate in ongoing industry regulation training every week,” says Coop. “We give dental and medical customers HIPAA and PCI checklists to see how they score. It’s been a huge investment in time and money, but we’re now serving 95 percent of the dentists, orthodontists, and oral surgeons in our area, so it was a necessary strategic move.”

Coop says MSPs serving these markets need to know, for instance, if a dental customer gets hit with CryptoLocker, is it a reportable offense? The answer is that, as of April 2016, it is considered a reportable offense because succumbing to CryptoLocker means that the perpetrator had to install software on the victim’s network, which could potentially remove data. The IT solutions provider must find out how a customer got the ransomware virus, and it needs to document the steps followed to remediate the problem.

CCB’s training has included traveling to industry trade shows, learning the industry lingo, and becoming familiar with common business challenges in dental and medical fields. “In 2017, we’re repeating the same process for insurance and other verticals,” says Coop.

CCB’s five-year growth plan includes expanding its business into new regions. “Our organic growth in the past allowed us to hire less-experienced team members and then train as we grew,” says Coop. “The entrylevel experience and credential requirements have increased significantly over the last few years, however. We must look for new business opportunities and employees outside of our immediate region and learn to develop and manage these staff members remotely.”

“It’s been a huge investment in time and money, but we’re now serving 95 percent of the dentists, orthodontists, and oral surgeons in our area.”

A key requirement for any IT solutions provider is to adapt to change, say Coop and Colson. “Customers are moving to the cloud, and we’re seeing an IT focal shift from inside to outside,” says Colson. “Instead of managing on-premise devices, we’re seeing a transition to managing customers’ circuits. There’s always something that has to be managed; it’s just important that MSPs not fall in love with one particular area of IT.”

CCB is embracing the cloud — including Amazon AWS and Microsoft Azure hosted services, such as domain controllers in the cloud. “The network border is expanding. Soon there will be lots of micro businesses,” says Coop. “Instead of traditional insurance companies with 50 employees, we’re going to see lots of micro insurance companies with two office workers and a secretary. These newer companies have similar security challenges and business needs as their larger counterparts. MSPs need to adapt their solutions and services offering if they’re going to meet the needs of these emerging businesses.”