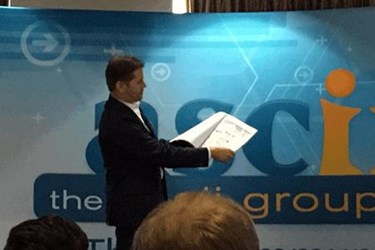 Frank DeBenedetto, CEO at Two River Technology Group, LLC and audIT Sales Presentation System, has over two decades hands-on experience implementing IT strategies. DeBenedetto imparted lessons he learned over the past 20 years during the second day of presentations at the ASCII Success Summit — Columbus held May 17 to 18 at the Sheraton Columbus Hotel at Capitol Square.

DeBenedetto founded Two River Technology Group in 2004 to meet the technology needs of businesses with 10-40 employees in the greater New Jersey and New York City areas. A little more than two years ago he founded audIT Sales Presentation System, a way for MSPs to help prospects step back and review all aspects of their technology. The development of audIT — which was almost an accident — served as the topic of DeBenedetto’s presentation.

You Suck At Selling
Most SMB owners, according to DeBenedetto, suck at selling for a variety of reasons; from chasing the flavor or the month, to simply winging it, to not possessing selling discipline. It was problems like these that led DeBenedetto to develop his system that serves as the foundation for audIT.

“I sold off the proposal, presenting the raw data as proof of concept to make the sale,” says DeBenedetto. “I devalued my service by lowering my price to make the sale and sold the prospect what I thought they would buy instead of what the needed.” DeBenedetto then read Made To Stick by Chip and Dan Heath which taught him to change his process by providing:

Secrets Of Successful Selling
“Think like a doctor and not a technician when selling,” advises DeBenedetto. “When you go to learn the results of an MRI, you don’t look at every report and every image. The doctor simply says ‘You have a torn ACL.’ That is the type of simplification you have to provide your prospects in order to make a sale.”

DeBenedetto also advises to use your data gathering tools to perform your discovery, then analyze the data and develop a bottom-line summary statement. DeBenedetto says, “Think of it like Twitter. You have to be succinct.”

When providing prospects with reports, use color — literally color — to elicit emotion. “We know prospects buy based on emotion, and color helps to elicit that — especially when you are presenting the results of an audit,” says DeBenedetto. Color draws attention to problems, so a list of 15 issues — green for items that aren’t a problem, yellow for potential problems, and red for problems that need immediate attention — creates unexpectedness (primarily the items in red) and further engages the prospect. It also leaves them wanting to see the solution — an emotional response that can help you when selling.

DeBenedetto also advises adding infographics when meeting with prospects, either a picture on your letterhead or going to Fiverr and hiring a professional. “Infographics and pictures are a great way to simplify a complex concept of product,” DeBenedetto says.

Put Your Money Where Your Mouth Is
DeBenedetto trialed his approach on existing customers during quarterly business reviews (QBRs) so as not to “waste prospects.” It use useful in upselling and cross-selling cloud solutions, leading audIT to begin giving it away for free to prospects. “Prospects kept saying no one ever explained IT in this way before,” says DeBenedetto. “They also loved the simplicity of the presentation.”

Once DeBenedetto was convinced the idea was going to be a hit, he began charging to audit prospects. This had the dual advantage of increasing revenue and driving away prospects who were most likely never going to use his services anyway.

The ASCII Success Summit — Columbus is being held May 17 to 18 at the Sheraton Columbus Hotel at Capitol Square. It is one of nine solution provider-focused conferences ASCII is hosting in North America in 2017. For more information on ASCII, go to www.BSMinfo.com/go/InsideASCII.