The 4 "Nos" That Lead To More Profitable Managed Services "Yeses"

This MSP’s introspection during the recession led to business changes that produced two-years-and-counting of double-digit revenue growth.

Choose A BDR Solution That Can Outsmart CryptoLocker

Acumen IT is a managed services provider that’s been in business nearly 16 years and has become very familiar with data storage and BDR (backup and disaster recovery). Like many other IT solution providers, this MSP (managed services provider) investigated several vendors over the years before finding one that founder David Pence describes as the iPhone of BDR for the SMB market. “We prefer Datto for our SMB customers because unlike many of the point solutions that address only one aspect of backup and recovery, Datto offers comprehensive protection,” he says. “And we’ve seen several examples and scenarios that illustrate how well the product works when server crashes and other disasters strike.”

Within the past year, one of Acumen IT’s financial services customers was victimized by an email phishing scheme that launched the CryptoLocker virus on its network. The way CryptoLocker works is that it encrypts documents, presentations, spreadsheets, and database files, and afterwards requires the victim to pay several hundred or even thousand dollars to purchase a decryption key, which may or may not work. “This particular client used a million-dollar financial software application that contained a majority of its mission-critical data,” says Pence. “Losing this information would have not only severely hampered the firm’s reputation with its clients, but also could have put it out of business.”

As soon as the CFO of the firm, who had inadvertently launched the ransomware virus realized what had happened, he contacted Acumen IT in a panic. “We were able to remotely log in to the Datto SIRIS BDR appliances located on the customer’s premise and perform a rollback to the hour before the firm’s network became infected,” says Pence. “Using Datto’s instant on-site virtualization technology, we were able to restore hundreds of thousands of files in about a half hour.”

Not only did this situation confirm the reliability of the Datto BDR solution, it also highlighted Acumen IT’s expertise in selecting the right kind of backup technology. “Some IT solution providers use only file-based backups to protect their customers’ data, but that would have been disastrous in this situation,” says Pence. “What would have most likely happened is that as soon as the virus began encrypting the files, the backup software would have backed up the encrypted files to the cloud and overwritten the previous files. With Datto, we’re able to take snapshots of our customers’ data and then subsequent incremental snapshots as updates are made. With this technology, it’s much easier and quicker to perform a data restore than it would have been with most file-based backup-only BDR solutions.”

David Pence has been at the helm of Acumen IT since its founding in 1999, and like many other IT solutions providers, his company felt the impact of the recession a few years ago. Looking back, Pence says that the upside of this difficult period was the deep business analyses it led to and the important changes that followed, which are driving Acumen IT’s double-digit growth today. Pence’s business strategy is leading to a lot of yeses nowadays — especially among healthcare and financial services clients, which the MSP is pursuing. The prerequisite to Acumen IT’s yeses came from learning how to say no to less profitable business opportunities.

1 — Say No to Accepting Just Any Client
If there’s one thing that Pence is adamant about, it’s that he should have learned how to say no much sooner. “Of all the training and resources available to resellers, a course on saying no is the most needed and probably the least available,” he says. “More than 80 percent of all MSPs would say yes to any client and any project. That mindset is the number-one factor that gives our industry a bad rap and keeps IT providers running in every direction and settling for slim margins.” Pence admits that it was the recession that led to this revelation for him, a time when most companies were scrambling to take whatever business they could find.

The first no that Pence decided upon was that Acumen IT wasn’t going to accept just any new client — certain criteria would have to be met first. “Our first criterion was that the client had to be in professional services, and the second was that it had to be willing to make changes to better its business,” he says. “The analogies that kept coming to mind were from the healthcare vertical. We used to operate like a medical doctor from the 1800s — carrying a black bag with tourniquet, hammer, and saw. And we needed to become a modern-day surgeon specializing in one area of the body and using the latest medicine and advanced tools and technologies.”

Today, the average new client Acumen IT takes on has between $30,000 and $50,000 worth of IT changes that require Acumen’s expertise procuring, implementing, and managing. “The majority of new clients we encounter have not met their industry IT standards, and they have not performed any crucial IT maintenance in the past five to seven years,” says Pence. “Through consulting and analyses, we help clients identify these gaps, and we show them how making this investment actually pays for itself many times over.”

2 — Say No To Selling To All Vertical Markets
When some of its revenue streams began to dry out during the recession, Pence realized he needed to identify where the declines were coming from. Running reports from his ConnectWise PSA (professional services automation) tool led to several revelations. “The two markets we were invested in at the time that were most affected by the recession were retail and construction,” he says. “When people are going through a financial crisis, one of the first things they cut out of their budgets is going out to dinner. And plans for building new homes and businesses also got put on hold during this period.” At the other end of the spectrum, Pence observed that healthcare and financial services clients were unaffected by the economic downturn. “What’s more is that in Greenville, SC, where we’re headquartered, the hospital is the largest employer in the state, and we have all kinds of doctors offices and surgery centers in our area. Plus, we’re only about an hour and a half from Charlotte, NC, which is the financial services hub of the state.”

South Carolina also is a big auto industry state and home to such big names as BMW, Bridgestone, Honda, Mack, and Michelin, just to name a few. But, for Acumen IT, this market is on the no list. “Not only is the auto industry severely affected by the economy, it’s not a market our technicians and salespeople were particularly excited about becoming experts in,” says Pence. “We found the same thing with construction, and our technicians were least passionate about retail. Since 2009, we had a large nonprofit client that operated 50 retail stores in South Carolina, and it asked us for 24/7 helpdesk support, which in hindsight put more of a strain on our work force than we realized, due to their busiest times occurring on weekends and holidays,” he says. Today, all of Acumen IT’s top vertical markets follow 8 a.m. to 5 p.m. Monday through Friday work schedules, and it’s rare the MSP gets called for after-hours tech support.

3 — Say No To Mixing Break-Fix And Managed Services Customers 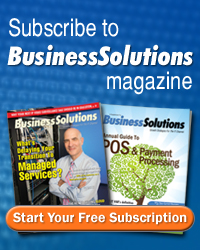 One of the exercises Acumen IT performed a few years ago was conducting a thorough customer assessment. The MSP evaluated every customer it had billed in the previous 36 months and looked for key performance indicators such as:

“At the end of the evaluation, it was clear that out of the 397 customers on our list, the 150 managed services customers were the ones we wanted to focus our sales, marketing, and technical resources on moving forward,” says Pence. Recognizing the importance of both groups of customers, however, Pence started a new company, OfficeTechPro, to address the needs of Acumen IT’s break-fix customers. “We’ve come to realize that a seven-person law firm that needs IT support twice a year is a better fit for OfficeTechPro, which is like a minute clinic, as opposed to needing a specialized hospital like Acumen IT.”

4 — Say No To Keeping Customers That Don’t Fit Your Managed Services/Market Plan
After performing its customer and market analyses, Acumen IT had a hard decision to make, one that would go against the grain of the majority of IT solutions provider thinking. It had to part ways with customers that didn’t fit its vertical market or managed services requirements. “We shed 15 customers in 2013, another 15 in 2014, and we expect to do the same this year and for the next few years,” says Pence. “We’ve been adding new customers, too, but it’s much different than before, because we’re focused on only a few vertical markets now.” Pence says the move is akin to aligning magnets in the proper order with their polarity drawing them toward one another. He also says that the customers he turned over to his competitors have been appreciative of the way he’s handled the transition. “Our approach is similar to the dating tactic, ‘It’s not you, it’s us,’” he quips. “In every case so far, the customer has understood our business realignment decision, and some have even apologized for not being more proactive about their IT decision making.” 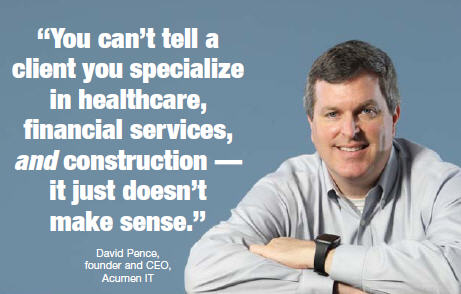 Although Acumen IT has become more narrow in its focus, Pence believes this will lead to expansion into new technologies in the future. “We used to troubleshoot desktop PCs that were used within the four walls of an office building,” he says. “Then, laptops and tablets were added to the mix, and nowadays Android and iOS devices plus remote workers are a normal part of nearly every workforce. I believe in the future it’s possible we could be involved in troubleshooting Nike sneakers and other wearable technology as the world moves toward the Internet of Things (IoT).” And that’s why Pence believes it’s more important than ever to align with a few vertical markets that have a long-term growth forecast (like healthcare and finance) and to dispose of the rest. “You can’t tell a client you specialize in healthcare, financial services, and construction — it just doesn’t make sense,” says Pence. “Our new focus has enabled us to increase our expertise. For example, over the past year we’ve been working on getting HIPAA- and FINRA [Financial Industry Regulatory Authority]-certified, which we expect to attain within the next couple of months. We’ll be one of the only MSPs in the southeast region with that expertise, which will give us a distinct business advantage in these markets.”

On the flip side, says Pence, not only do IT generalists have a harder time winning business in highly regulated industries, there’s another downside that’s becoming a bigger issue, which is liability. “In healthcare, everyone is signing Business Associate Agreements [BAAs], and the generalist IT solutions providers often don’t realize the binding implications of these contracts,” he says. “When the next iteration of CryptoLocker compromises their customers’ data, it’s going to lead to more lawsuits being filed than ever before. We’re doing everything we can do to mitigate customers’ risks and prevent catastrophes, so we can continue building our reputation in these markets as trusted business advisors who really know what they’re talking about.”